Now, this is celebrated as one of the classics from the black and white era. Of course, it is not spoken in the same breath as Pyaasa/Mother India/Devdas/Mughl-e-Azam, but those conversant with the cinema from that era do recall this Bimal Roy film as one of the finest to have been made in India. I had not heard about this one at all, and I believe it would be the same case with most others of my age. And now that I have seen it for myself, there is a case for me to include this on my blog about lesser known cinema (By calling it lesser known, I don’t mean to disrespect the movie in any manner. This disclaimer is the result of some feedback I had received when I had written about ‘Do Bhiga Zameen’ as a part of this series of posts)
Bandini is one of those rare female-centric Hindi movies that have a strong story to tell. When we look at some of the movies of today that have central female characters like Fashion or Laaga Chunari Mein Daag, they have had extremely predictable contexts (This is not a comment on the quality of these movies). But Bandini has a story that cannot be expressed in two sentences. It is thoroughly engaging not just because of the way the narrative plays out, but also because it evokes a lot of interest through the suspense route it takes to bring out the facts in front of the viewers.

Kalyani (Nutan in an award winning role) is a convict who is serving her sentence in a women’s jail, after admitting to having killed someone. Dr. Devender (Dharmendra in one of the earliest roles of his career), is a young and debonair man who has recently been appointed the post of the prison-doctor. Devender meets Kalyani, and they strike a companionship while tending to a sick co-inmate of Kalyani for whom she acts as a nurse. Rumors start to go about all over the jail about their love affair, and Devender admits to being in love Kalyani. He offers to marry her but she refuses to accept his generous gesture, citing the terrible past she has had and the terrible sin she had committed. Unable to digest the disappointment, Devender resigns from his job and leaves the prison complex. Meanwhile Kalyani goes on to reveal everything about her past to the kind prison-master (who is also Devender’s close relative). What all had happened in her life, and what had forced her to commit the grave crime, is what the movie is all about from that point in time.
The movie is set in pre-independence era when young revolutionary men were making huge sacrifices for the cause of their motherland. Kalyani had become romantically involved with one such man Bikash Ghosh (played by Ashok Kumar) and how their love story had panned out is what the story looks at. Apart from this story of course, what is extremely interesting to note is the way the revolutionaries were handled by the British Raj at that point in time. Bimal Roy brings to the proceedings a sense of authenticity which is extremely rare and refreshing. The jingoism is kept out completely; the focus never deviates from the central theme i.e. the journey of the central character Kalyani. 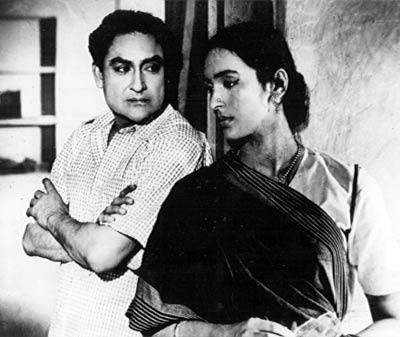 What is really remarkable is that Bimal Roy chose to create very real characters. One trapping of Hindi cinema has been that the bad people are always terribly bad, and the good guys are angels on earth. There is something between black and white, and it is a good reflection on the grey matter of the maker of the movie, that he did not choose to ignore grey. So while the young doctor falls so hopelessly in love that he ignores all his roles and responsibilities; on the other hand Kalyani does not hesitate to kill someone out of her anguish and anger. Even Bikash Ghosh betrays the trust of his love, though he has a very good reason to do so. All this gets summed up in a brilliantly shot climax sequence. It would be a disservice to write about it in detail, but one this is sure that it is one of the most thought provoking and emotional end to a movie. Also, there is a song that plays in the background while Kalyani is forced to make the biggest decision of her life- the lyrics of the same are amazing in the manner in which they bring out the dilemma of the central characters.
I admit I haven’t seen much of Nutan’s early work (My best memory of her is her portrayal of Anil Kapoor’s mother in Meri Jung), but Bandini gives a fair idea of her amazing acting prowess. She truly is brilliant in an author backed role. Ashok Kumar is his usual efficient self (But it is strange to see that even in a 1963 film he did not look much different to how he looked in his 1970s films). Dharmendra has a supporting role, in which he looks great and performs ably. The music of the film is very nice and the songs complement the story beautifully. The story is adapted from a novel by a noted Bengali author Jarasandha (who incidently was a former jail superintendent and wrote fictional accounts of his experiences- Source Wikipedia)
Parting Note- Bandini is a remarkable movie that is different from anything else that has been seen in Hindi cinema. It is one of Bimal Roy’s most noted works and most certainly deserves the tag of a ‘classic’.